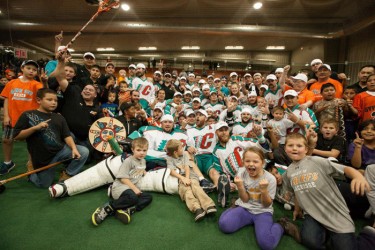 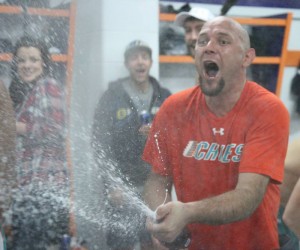 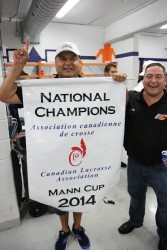 The Six Nations side hosted this year’s Canadian finals. The Chiefs wrapped up the best-of-seven national championship with a 9-4 victory over the Victoria Shamrocks in Game 6.

Six Nations also defeated the Shamrocks in the 2013 Mann Cup final, which was staged in Victoria and also lasted six games.

“I guess it’s a bit more special winning in your own community,” he said.

Early on it appeared it might be the Shamrocks who would be celebrating at the conclusion of the series.

Though the Chiefs did win the series opener, the Victoria side rebounded to win the next two contests.

For starters, the Shamrocks registered a 6-5 double overtime victory in Game 2. Victoria then eked out a 12-11 overtime win in the following match.

“As coaches we were a little bit worried,” Jacobs said.  “(The Shamrocks) played hard. And they played pretty good defence.”

The Six Nations side, however, was able to rack up three straight wins to claim the series. This included a pair of lopsided wins, 12-6 in Game 4 and the series clincher (9-4).

Chiefs’ goaltender Brandon Miller, who played all of the Mann Cup games, was selected as the event’s most valuable player.

And offensively the Six Nations side was led by Cody Jamieson, the 2013 Mann Cup MVP. Jamieson led all tournament scorers this year by racking up 26 points (12 goals, 14 assists).

The Chiefs have now captured five Mann Cup championships during their franchise history. They had won three straight national titles from 1994-96.

The club’s current head coach, Rich Kilgour, and Jacobs are the only two individuals who have been part of all five Mann Cup winning teams. Kilgour and Jacobs played for the Six Nations championship teams during the ‘90s.

Earlier this year it appeared the Chiefs would not be defending their national crown. The club had its share of struggles during regular season action and only had a 9-9 mark.

“We always believed in ourselves,” Jacobs said. “We didn’t have the regular season we wanted. But we looked at our lineup on paper and asked ‘how can we can better.’ We felt we didn’t need to.”

Jacobs added the team’s mediocre regular season record can be attributed to the fact the club had some injury troubles and also to the fact 12 of its players missed some action as they were participating at the world field lacrosse championships, which were held in July in Denver.

The Chiefs got their act together in the post-season. They started off by upsetting the top-ranked Brooklin Redmen in five games in a MSL best-of-seven semi-final series.

Then they earned the right to host the Mann Cup by edging the Peterborough Lakers 4-3 in their league championship series.

The Chiefs were not the only Six Nations lacrosse team to enjoy their share of success this year.

Two others also captured their national championships. The Six Nations Arrows won the Minto Cup, awarded annually to the top Canadian Junior A lacrosse side. And the Six Nations Rebels captured the Founders Cup, the national Junior B crown.

The Arrows won their Minto Cup on Aug. 23 in Langley, B.C. They defeated the host Coquitlam Adanacs 4-2 in their best-of-seven national final.

The Arrows were led by captain Johnny Powless, the tournament MVP who earned 29 points, including eight goals, in six matches.

Afterwards, Powless joined the Chiefs and helped them win the Mann Cup.

Powless, who is 21, had an unbelievable lacrosse year. He also won a National Lacrosse League championship earlier this year with the Rochester Knighthawks.

As for the Rebels, they won their seven-team Founders Cup tournament, which was staged in Halifax. They defeated the Seneca War Chiefs 14-7 in the gold-medal game, staged Aug. 24.

Meanwhile, another Six Nations team, the Senior B Rivermen, just missed out on winning a national championship. The Rivermen were downed 9-7 by the Onondaga Redhawks in the championship final of their seven-team Presidents’ Cup tournament, which ended Aug. 31 in Coquitlam.