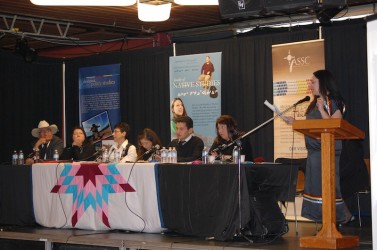 “Idle No More is a wakening to all the people of this land,” said Samson Cree Elder Cecil Nepoose.

That thought was just one of many shared by a panel of six at the University of Alberta, who spoke about the movement in a three-hour presentation on Feb. 8.

“What we heard from the panelists today is that the Idle No More movement has meant numerous things to Indigenous peoples,” said Shalene Jobin, with the Faculty of Native Studies at the U of A. “One of them is honouring Indigenous knowledge and honouring the ability us as Indigenous peoples have to sing our songs, to do our round dances, to have a space to talk about these issues at an intellectual and at a heart level.”

This internal focus is one aspect of Idle No More, said Wab Kinew, director of Indigenous Inclusion at the University of Winnipeg.

“Somehow we have to awaken within our communities the strong warrior spirit,” said Kinew. Poor habits need to be changed and replaced with healthy ways of life.

But Idle No More has another aspect to it, he said, it is one that focuses on the political level.

“It has marched our culture and our cause back into the national collective conscience….It has energized so many people from coast to coast to coast,” said Kinew.

Bringing together the grassroots is powerful, he said, and has been illustrated by the thousands who have gathered throughout the months of December and January right across Canada.

“What I would like to suggest to people with Idle No More… we need to step up our ground game,” Kinew said. “If we are to move forward I think that is an important thing to consider.”

Political pragmatism is needed, he added.

He challenged the movement to continue its actions and this time to focus on the upcoming budget.

Kinew said Idle No More had to continue with the ground game that has been successful and which includes making use of social media.

Danny Metatawabin, who served as spokesperson for Attawapiskat Chief Theresa Spence during her hunger strike, said it was social media that delivered Spence’s message. Mainstream media wanted to focus on the poor living conditions in Attawapiskat, which was not the story that Spence wanted to tell.

“Through social media our main message went across,” said Metatawabin. “What we were trying to get out was the positive message of what we were doing… to talk about change from the grassroots level.”

Tanya Kappo, from the Sturgeon Lake Cree Nation, was the women to make use of #IdleNoMore.

“I have a responsibility as much as I do have treaty rights,” she said. “So I’m not going to wait for First Nations leadership anymore to talk about this and say it’s wrong.”

That was what led Kappo to follow in the footsteps of the Saskatchewan women who began Idle No More.  Kappo hosted the first Idle No More teach-in in Alberta, which took place on the Louis Bull First Nation.

Kim Tallbear, from the University of California-Berkeley, said the impact of the social media on the Idle No More movement cannot be understated. She said there are people who have never left their home communities but have been on top of the movement through Facebook and Twitter. In this manner, Idle No More has garnered global attention.

But where does the movement go from here?

Jobin is adamant that the movement is not losing momentum. “I see the organic nature of it allowing different things coming out of it, different creative energies to show in different ways, but I don’t think it’s dying out.”

Spence said it is important for Chiefs to stand behind Idle No More and to remain connected with the grassroots.

“We’ve come to far this time to turn back now,” said Kinew. “We owe it (to our ancestors) to make sure that the change we see today is accomplished. something really happen this time.”