Survivors fight for the truth of St. Anne’s 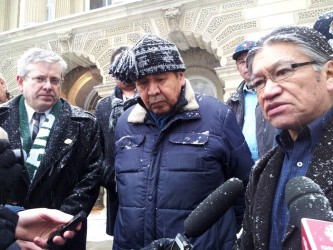 Survivors of St. Anne’s Residential School were in provincial court in Toronto on Dec. 17 for the first day of a two-day hearing. They want the federal government to hand over documents from a five-year investigation conducted by the Ontario Provincial Police (OPP).

The investigation, begun in 1994, was the result of complaints from former students of physical and sexual abuse by priests, nuns and other Catholic caregivers at the school. St. Anne’s operated in Fort Albany, Ont. for more than 70 years, taking children from the James Bay area.

Those in charge of the school fashioned an electric chair in which children, both boys and girls and some as young as six years old, were placed and tortured. Children were also sexually abused and were made to eat their own vomit.

The OPP investigation in the 1990s resulted in witness statements from 992 people. In a letter to Peter MacKay, minister of Justice and Attorney General of Canada, dated Nov. 25, NDP MP Charlie Angus wrote, “We learn from the Crown affidavit of 2003 that there were 180 identified perpetrators of physical and sexual abuse, rape and the actual torture of children at St. Anne’s from 184 plaintiffs. We also learn that 860 people made complaints to the police.” That investigation resulted in the conviction of five former employees.

Former students of St. Anne’s attending were, among others, Andrew Wesley, chair of the Fort Albany Residential School Survivors Association, and Ed Metatawabin, spokesperson and “champion of the cause” for 20 years, according to Chief Knapaysweet. Several members of Toronto’s Aboriginal community packed the courtroom to show their support.

Canada’s first volley in court was to request a publication ban and to place a sealing order on all the documents. The federal government cited “privacy concerns” for former students.

As for the government’s privacy concerns for the victims, Angus said he has never seen Canada show any real consideration for what happened to the victims at St. Anne’s. A sealing order will, “keep this from being seen publicly, preventing Canadians from knowing the extent of the abuse, and the amount of collusion that went on that allowed this to go on decade after decade in that terrible institution,” said Angus, clearly frustrated.

Angus' letter to MacKay outlines the complaint that the federal government has hidden the truth when it comes to St. Anne’s School, undermining the IAP process and denying justice to the survivors. The letter asserts the obligation under the Residential Schools Settlement Agreement to provide evidence to the IAP and the Truth and Reconciliation Commission. The TRC has requested the documents.
The federal government has also not provided information to the IAP, and according to Angus’ Nov.  25 letter to MacKay, the federal government provided a false narrative stating that there is no documented evidence of abuse at St. Anne’s.

The legal wrangling on the publication ban and sealing order took up most of the day on the 17th. Justice Paul Perell heard arguments from the lawyers for the St. Anne’s School survivors, the Truth and Reconciliation Commission, Canada, the Chief Adjudicator for the Independent Assessment Process (IAP), the Sisters of Charity/Grey Nuns, and CBC. Earlier in the day, counsel for the nuns said his clients wanted the names of the order removed from the documents.

Late in the afternoon, Justice Perell gave his decision on the publication ban. No names of any individual involved in the IAP process could be published in any form, including the internet, unless the individual gave their consent to have their name published. Justice Perell said he would hear the motion about the sealing order early in the New Year and felt this would give the media ample notice.

Susan Hunter who agreed to be interviewed earlier in the day said she attended St. Anne’s from the time she was seven till she was 14 years old.

“It wasn’t always a good environment to be in,” she said, and that one of the nuns made her life miserable the whole time she was there. Hunter was interviewed by the RCMP and the nun was charged. It was several years later that she received a letter from her, Hunter said, “but I don’t know if I have any forgiveness in my heart. She said how sorry she was but it was not enough for me.”

Andrew Wesley said he wanted to get on with his healing. “Myself, I’m very old now,” he said, “and the little boy that was tortured in residential school is gone now and I have to take on the business of healing and also lead the healing for the survivors that I represent.”
For 28-year-old Chief Rex Knapaysweet, it was an emotional day.

“I just can’t wrap my head around the fact that Canada apologized to us years ago and then withheld information for 10 years. It makes me question the apology in the first place and I feel like it doesn’t carry any weight now. How serious was Canada when they made that apology?”