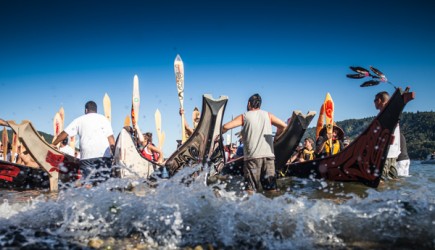 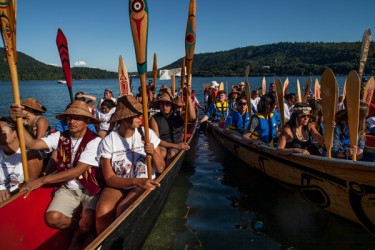 As the flotilla of ocean-going Coast Salish canoes broached the rapids under Vancouver’s iconic Lion’s Gate Bridge Sept. 2, police boats followed with sirens flashing and officers keenly observing. To the north, hundreds of people gathered on a Tsleil-Waututh Nation beach to welcome the convoy.

But instead of heading straight to the waiting beach crowd, the armada of nine 20-person Tsleil-Waututh and Squamish nation vessels turned south–bearing drummers and traditional regalia–and joined kayaks, fishing boats and even one-man, paddle-boarders as it approached the Kinder Morgan oil refinery in Burnaby, B.C.

The day’s two-hour paddle–undertaken from West Vancouver to Deep Cove–had significance both cultural and political. As Kinder Morgan proposes to more-than-double its Trans-Mountain oil sands pipeline from Alberta, and expand an oil supertanker port in Burrard Inlet, First Nations and environmentalists on the coast are escalating their opposition to the project.

The paddle journey culminated in the two nations’ chiefs signing a declaration to protect the Salish Sea.

“By signing this declaration, our Nations are calling on people from all cultures to stand with us to protect our environment for future generations,” Tsleil-Waututh Nation’s Chief Justin George told a packed crowd. “This celebration reminds us all that there is room for many paddlers in one canoe. When we paddle together, with one heart, one mind and one spirit, great things can happen.”

Squamish Chief Gibby Jacob welcomed environmental group representatives to join the journey in their own ocean-going canoe–an alliance he said is essential to protect the sea from the risk of an oil spill disaster from tanker traffic or a pipeline rupture.
“The potential for an oil spill is too high for our people, our community, and this region,” Jacob said. “We are exercising our Aboriginal rights and title and will uphold our Nation’s cultural and environmental values.”

In front of Kinder Morgan’s hopeful seaport site, one of the canoes–painted in traditional red-and-black designs–broke off from the convoy, making a wide arcing circle in front of the corporation’s existing green storage silos as pullers conducted a ceremony, drummed, and cast protective prayers over the unsettled waters of the Salish Sea, also called Burrard Inlet.

“Throughout the Burrard Inlet, we had multiple villages scattered,” explained Ernie George, director of Treaty, Lands and Resources for Tsleil-Waututh Nation, guiding Windspeaker on a chartered fishing vessel beside the flotilla. “Water is our life: it was our highway before, and this whole inlet has been sustainable for us from time-out-of-mind... It gave us sustenance; it gave us food, fish, waterfowl, crabs, clams and oysters; it was our economy.

“As time goes along, we’re here to celebrate it and say we’re still using it – we’re here and we’re not going anywhere. This is our waters, and it’s our obligation to protect it.”

But out on the Salish Sea, George is circumspect, and reluctant to wade into politics; he leaves that to his chief. Today, he said, is primarily about tradition and ceremony, despite its obvious political ramifications to Kinder Morgan’s plans, and the government’s industrial ambitions.

“It’s really connecting us back to the water,” he said. “We invited nations from around our territories to come here. We all jump in a canoe, have a ceremony on the way out, shove off the beach, and enjoy the water.”

But from its side, Kinder Morgan insists its proposed expansion is safe. In fact, the Trans Mountain Pipeline has been operating since 1957. The proposal, at an estimated building cost of $4.1 billion, would increase its capacity from 300,000 to 750,000 barrels a day.

With massive controversy swirling around Enbridge’s Northern Gateway pipeline proposal in northern B.C., which would also transport diluted bitumen from Alberta’s oil sands, the focus on that project has so far eclipsed the Trans Mountain proposal. But that is changing as an increasing number of analysts speculate that the Northern Gateway may simply be a non-starter.

If that is the case, it would vastly increase the pressure to export bitumen to Asian markets via an existing route, drumming up less controversy and public polarization. But in spite of that, opposition is rising to the existing pipeline, including formal opposition to Trans Mountain’s expansion from the City of Vancouver, environmental groups and numerous First Nations.

The increase in tanker traffic enabled by expanding Burnaby’s Westridge Marine Terminal has, in particular, been flagged for risk of an oil spill as ships navigate the Burrard Inlet. But the company points to existing ship traffic in defence of the safety of its proposal.

However, the risks are vividly real for the paddlers. An accident under the nearby Barnet Highway dumped 234,000 litres of crude oil into a residential area in June 2007. Likewise, a series of recent pipeline ruptures–and memories of the Exxon Valdez tanker spill decades ago–are fresh in the minds of Kinder Morgan’s opponents.