TRC: Survivors weep for those who died 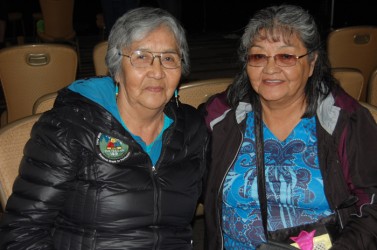 Annie Johnston and Madeleine Jackson held each other and wept softly as Truth and Reconciliation Commissioner Dr. Marie Wilson talked about the children who had died at residential school, many of whose names were not recorded. And for more than half, the cause of death was not known.

“(Some) died alone in the wilderness, trying to escape from oppression and conditions they suffered at the school. Some children got lost, some drowned, others were eventually found, huddled together, frozen to death,” said Wilson.

And Johnston understands why. She ran away from
the second residential school she was sent to. She was in her mid-teens and into her third year at a residential school in Whitehorse, Yukon. She was one of the lucky ones: she made it home and to freedom.

“It hurt … especially when they said some of the kids were found frozen together,” said Johnston. “Anything was better, you know, just to get away from this place.”

“It was like we were in prison, in jail,” said Jackson. “My parents didn’t understand what was going on, what happened. When we were at the school for about a month, they let us do what we wanted. Then they started strapping us.”

Johnson and Jackson both attended Lower Post residential school in northern British Columbia. Jackson was nine years old
when she was taken from home and spent five years at Lower Post. Johnston was five years old and spent six or seven years in Lower Post before being transferred to Whitehorse.

Wilson detailed the tragic loss of lives when she spoke on June 2 as the TRC delivered the nearly summary of its two-million word final report. Wilson said they have counted the deaths of 3,200 students – even if in one-third of those cases the students were not named and in one-quarter, the gender was not noted.

But that number is low, she said, and the exact number will never be known. Between 1936 to 1944, the federal department of Indian and Northern Affairs destroyed over 200,000 relevant files. And there is still documentation that needs to be reviewed to “find some of those precious names so they can be spoken aloud and remembered,” said Wilson.

Analysis based upon other studies indicates that it is realistic to extrapolate that five per cent to seven per cent of the students, who attended Indian residential schools, died. With an attendance figure of 150,000, that means at five per cent up to 7,500 children could have lost their lives.

Death rates were high because medical care was poor; disease was unchecked; and buildings were fire traps. Students, neglected and suffering from physical, emotional or sexual abuse, took their own lives.

Most of the bodies of deceased children were not sent home, instead buried at cemeteries at the schools. Graves were left unmarked and many families still do not know where their children are.

“In some cases,” said Wilson, “children were buried before their parents were even told of their passing.”

Among the 94 recommendations made by the TRC is a handful that focuses on developing a national strategy that honours children who died at residential schools. This would include allowing the National Centre for Truth and Reconciliation to develop and maintain the National Residential School Student Death Register, which was established by the TRC, as well as ongoing documentation, maintenance, commemoration and protection of residential school cemeteries. Wilson said the work needs to be done in “close consultation” with Aboriginal communities.

“Mostly the causes of death found root in the same attitudes that enabled the schools to exist in the first place: a belief that Aboriginal peoples were inferior. A belief that they did not warrant investing in enrichment. A belief that their culture could and would be extinguished,” said Wilson.

Such a belief has impacted Johnston’s and Jackson’s home community of Teslin.

“The community we came from, a lot people went. And you shut down,” said Johnston. “The devastation that it’s caused, especially in the second generation, with my family, my children, you see it in the community.”

Jackson said Teslin feels the full impact of seven generations of children attending Indian residential school. Many traveled the 184 miles to Lower Post residential school but others went to Grouard, Alberta, which meant they stayed away for three to 11 years.

“They didn’t know their parents when they came back,” she said.

Both Johnson and Jackson had a chance to tell their stories when the TRC held northern hearings in 2011.

“I apologized to my children, that I wasn’t a good parent. None of us didn’t know how to parent because our mothers never teached us. We were brought to school before we didn’t even know what was going on. I apologized to them in front of everybody. They said they were sorry because they could feel my pain,” said Jackson, who took four of her children with her to Whitehorse when the TRC was there.