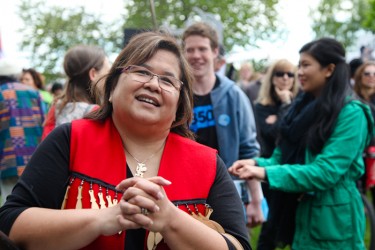 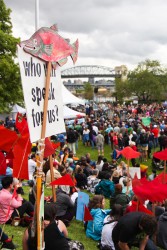 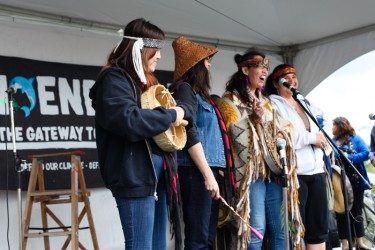 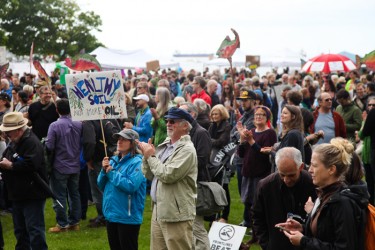 The First Nation’s battle against Kinder Morgan’s proposed expansion of its Trans Mountain pipeline from Alberta is heating up with the legal challenge against the National Energy Board’s review process.

“I feel the government has let us down again,” Chief Maureen Thomas told reporters May 2, announcing the suit. “They have not learned from past lessons. They are once again trying to ignore us, leave us behind, to walk over us, to treat us like we don’t exist here.

“When they continue to do things that are wrong, it’s not only important to us First Nations people, it’s also going to impact the rest of Canada. We cannot stand back and let this continually happen. We have to take a stand, to stand up for what we believe is right.”

The Texas company is boasting its $5.4 billion pipeline, which would nearly triple the diluted bitumen flow from 300,000 to 890,000 barrels, will boost economic growth and offer long-term jobs, including to First Nations. The project would see a seven-fold increase in oil tanker traffic from a Burnaby terminal through the Salish Sea.

Criticism of Kinder Morgan’s proposal intensified in the past month with the cities of Vancouver and Burnaby ratcheting up their vocal opposition with a number of council resolutions. The firm also faced ridicule after claiming in NEB filings that “pipeline spills can have both positive and negative effects on local and regional economies,” a claim immediately rejected by the NEB itself. The company insisted the statement was a required section of the application form.

The pipeline route travels through dense urban areas and populated coastline of the Burrard Inlet. Burnaby Mayor Derek Corrigan told Vancouver’s council, a 2007 rupture in the Texas firm’s existing pipeline, bursting 250,000 litres of crude into the streets, left a bad taste in his mouth towards the company.

“They consistently trivialize risks,” he said. “Kinder Morgan has a history of pipeline accidents all over North America. Why would we be different?”

The Tsleil-Waututh Nation’s lawyer in the case, Merle Alexander, said the aim is to force Canada to comply with its own Constitution and environmental regulations, particularly its duty to consult Aboriginal peoples. He said the current review process is “running roughshod” over Indigenous rights.

Alexander added that Tsleil-Waututh had two legal options going forward against the proposal: a judicial review, more common in environmental cases, or a direct challenge at the Federal Court of Appeal.

“Going to the Federal Court of Appeal would be a much more direct route, in part because the decisions made are final decisions already, and if they’re not corrected now, they’ll prejudice the entire environmental assessment process,” he told reporters. “Tsleil-Waututh’s legal position is that the Crown has failed to consult them, and therefore failed their constitutional obligations to them, and failed to comply with environmental statutes.”

For the Tsleil-Waututh chief, one byproduct of the court challenge will be to grant First Nations, environmental advocates and municipal leaders a chance to increase their support base — and continue calling into question the entire project application process, now streamlined under federal legislation.

“The main purpose right now is to delay the process, and they’ll have to restart (it) again, probably, down the road,” Thomas said. “That delay may bring on support from other First Nations and from other people here in Canada in general. With that delay will come the knowledge and impacts of what’s happening here.”

For Tsleil-Waututh Sacred Trust’s intergovernmental relations project manager, the “People of the Inlet” are not simply waiting for the courts to decide on the matter, and the lawsuit is just one step in a long-term strategy that’s unfolding.

“When I first started out with Sacred Trust it was all about protecting the air, lands and waters,” Carleen Thomas told Windspeaker. “But as I got more involved and gained more awareness, it became about the fallacy of the economics for Canada as a nation, and communities along the pipeline route.
“They keep saying this is the best thing for the economy, Canada depends on it, the world depends on our fossil fuels — when really it’s not.”

But as Kinder Morgan heads into its National Energy Board review process this fall, the questions around who is allowed to participate and what participants are permitted to discuss — on top of a raft of federal legislation that has vexed First Nations over the past two years, such as environmental assessment and water protection reforms — has raised deeper societal questions.
“Now, looking at the whole big picture,” Thomas mused, “our real challenge is the degradation of our democratic rights.”