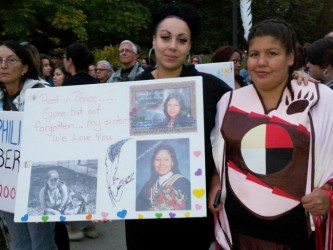 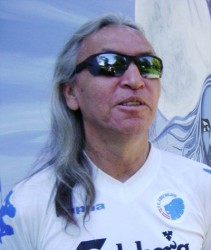 Photographs of Aboriginal women pasted on placards were grim reminders of why people were gathered in Toronto’s Allan Gardens on Oct. 4. On that evening, the Native Women’s Resource Centre, together with many other communities across the country, held the annual Sisters in Spirit Vigil to honour hundreds of missing and murdered Aboriginal women.

The first Sisters in Spirit Vigil was held on the steps of Parliament Hill in 2006. The vigils are held to support the families in their healing and to let all Aboriginal women know they are loved and valued.

About 200 people gathered at Allan Gardens, many of them carrying photographs of sisters, mothers and daughters who are among the missing and murdered women. For the first time, the City of Toronto proclaimed Oct. 4, 2013 as “Sisters in Spirit Day” in support of the movement’s efforts “to raise awareness about the alarmingly high rates of violence experienced by Aboriginal women and girls in Canada.”

“She was 31 when she was taken, murdered in London, Ont.,” Cywink said of his sister. “I have a picture of her in my room and I do remember her and think of her almost daily. I’m here to be with the many others who share the pain that is felt by someone who has experienced this. It’s an experience you wouldn’t really wish on anyone. It’s just…it’s heartbreaking.”

Speaking about the impact on his family, Cywink said, “I saw my father age several years after he buried my sister, his daughter.” His sisters, he said, felt particularly vulnerable wondering if they or someone they knew would be next.  Sonya’s murder remains unsolved. The police did what they could, he says, but they hit a dead end. His younger sister pushes the police to stay on top of the investigation, who have offered a reward for information.

Cywink said Prime Minister Stephen Harper won’t call an inquiry into the missing and murdered women because of the prevailing colonial attitude that says, “Aboriginal women are less than.” He’s also convinced that genocide is at the heart of this attitude.

“The women carry our children and carry on our rights and our culture,” Cywink said, “and if you remove our women from the equation, from society, then you have no claim here, they’ll say.”