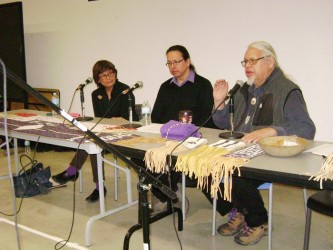 The Indigenous Visual Culture Program at Toronto’s OCAD University hosted a talk titled, Wampum: Language and Symbol recently. About 60 people gathered to learn about wampum from historians, curators and artists.

Historian and curator, Rick Hill, Tuscarora from Six Nations of the Grand River Territory, started learning about wampum belts when he worked in a museum in the 1960s.

“It made me mystified as to what were these things,” he said. “Where did they come from, where are they and how come I grew up not knowing about them.” He soon found out they’d been taken away by anthropologists who then took them to museums. Hill has been part of repatriating wampum belts from Toronto’s Royal Ontario Museum.

“Wampum is just a visual device by which memory is kept alive,” Hill said. “Our ancestors were very skilled in how to make these abstract symbols that have great meaning, great power. We also believe that wampum has its own power.”

Wampum belts are made with quahog clam shells which are the purple or black, and whelk shells which are white. Hill said, “By its nature, the shell is able to retain the words spoken over it and then it can be passed on from generation to generation.”

The white whelk shell is a symbol of power and peace and all the good things, and the purple or black quahog clam shell is just the opposite. “I thought it ironic that in the ocean,” said Hill, “these two are kind of enemies of each other… but the whelk can actually defeat the quahog clam. So the white shell can overcome the purple shell in the ocean and maybe that’s what our ancestors believed.”

The dish with one spoon wampum belt, “is probably the most significant in terms of the Native people in this land,” said Hill. “The old people say this represents the first treaty made in North America. It was made between all the Native nations before the Europeans arrived. It’s a simple belt with a field of white which represents peace and unity and harmony, with a little dark figure which represents the bowl.” Some of the belts contain an icon within the bowl that represents a beaver tail.

Of particular importance in this age of environmental degradation is the fact that the dish with one spoon is also a covenant with nature. “Nature says, ‘Here’s the great dish and inside the dish are all the plants, the animals, the birds, the fish, the bushes, the trees, everything you need to be healthy and therefore, happy’.”

Alan Corbiere, Anishnaabe historian and researcher from M’Chigeeng First Nation on Manitoulin Island in Ontario, said his introduction to wampum belts was the Covenant Chain 1764 entrusted to the Odawa people of Michilimackinac at the 1764 Treaty of Niagara. “It’s become a cliché now,” said Corbiere, “to say that treaties are living documents, but that’s what these wampum belts are as well.” He’s working on a paper making a case, “that this is what we would call our case law and our common law and these are our precedents. And I’m trying to show how each time they put another belt on, it’s actually another belt reinforcing the previous one.”

Corbiere met with a lot of skepticism when he started sharing his research on wampum with Manitoulin Island First Nations in 2002. “I was told, Mohawks have wampum; we don’t have wampum. Now, our Grand Chief, he has these belts…people have started to accept and see the evidence of our wampum tradition as Ojibway, Odawa and Potawatomi people.”

The organizer of the talk and a presenter, Bonnie Devine, is an Associate Professor and the Founding Chair of the Indigenous Visual Culture Program at OCAD University. A member of Serpent River First Nation in Ontario, she is an installation artist, curator, writer and educator.