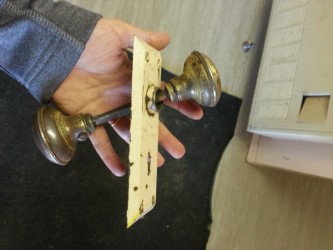 A week-long trip to southern Alberta and participation at the annual Feast to Remember the Children of the Red Deer Industrial School netted four more pieces to add to a unique Witness Blanket.

For Rosy Steinhauer, project coordinator for western Canada, the sandstone block from the industrial school’s foundation and the brick from the boys’ residence are particularly poignant.

“My great uncle is Ralph Steinhauer … and he attended the Red Deer Industrial School as did his sister, my aunt Winnie,” said Steinhauer, whose father’s family hails from Saddle Lake First Nation. Ralph Steinhauer was the first Aboriginal lieutenant governor in Canada.

Steinhauer also received pieces from the two residential schools that operated on the Kainai First Nation— a brass doorknob from the staff residence and a brick fragment at St. Paul’s and a brick from the foundation of St. Mary’s. She has verbal commitments for more contributions from Alberta.

To date, 50 pieces have been collected on the way to the 2,500 needed to complete the Witness Blanket envisioned by Kwakwaka’wakw Master Carver Carey Newman and funded through the Truth and Reconciliation’s Commemoration Project. The blanket is to be completed by the end of March 2014 and could be shown when the TRC holds its final national event in Edmonton at that time.

“My father was a residential school survivor so it was something that was close to my heart,” said Newman.

It took him about a year to develop the concept of a Witness Blanket, which will be made with pieces of former residential schools, government buildings, churches and traditional structures. Each piece collected joins to tell the entire story of a history which saw churches and governments take Aboriginal children from their homes and force them into residential schools.
“My personal view is (that) for us to achieve full reconciliation we need to include all parts of the story,” said Newman. “It’s about the actual truth of what happened.”

The blanket itself will be created from pieces of cedar and Newman anticipates it will be comprised of six-foot by three-foot panels totaling a finished product of eight feet by 30 feet. The cedar will be strung together with steel cable and the pieces gathered will be mounted on the blanket.

Initially, Newman anticipated only pieces from buildings but that concept has grown to include photographs, completion and graduation certificates, and personal items.

“The first suggestion that was a surprise to me was hair,” he said. “But that one is a very powerful one because of how many of the children who were taken have that as a big part of their traumatic story. Their first introduction was to have their hair shaved.”

On the back of the bark, the story of each piece will be told, including where it comes from and who donated it. A Web site will also be created for the project allowing further in-depth discovery of each piece.

Newman is an experienced carver, who makes his living through his art, which is primarily large-scale sculpture. He has worked on projects that are community-involved.

“This is a big departure for me. This is at a national level and the others have been local or provincial,” he said.

While the project is a result of the Indian Residential School Settlement Agreement, Steinhauer is adamant that pieces from all residential and day schools, even those not included on the official list of schools recognized under the agreement, will be accepted.

“The response has been amazing from pretty much every community we’ve worked with so far,” said Jamie Lewis, who heads the collection from the eastern parts of the country.

The project became a full-time commitment in April. It is the team’s hope to travel to every community in order to collect the offerings, but if that is not possible payment to ship the pieces to Victoria, where the project is headquartered, will be covered by the project.

Once completed, Newman will organize a tour of the blanket, or panels of it, taken to the smaller, remote parts of the country, ending with a show in Ottawa. When the tour is completed, the blanket could be permanently installed in the new National Research Centre, which is to be housed at the University of Manitoba.