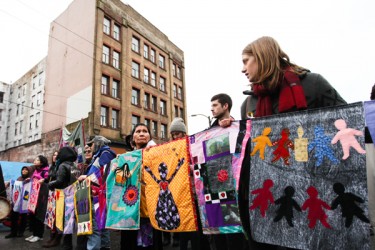 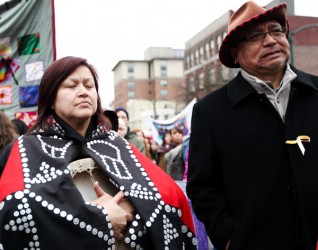 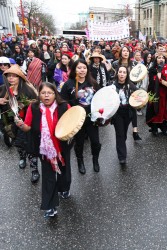 Long-time women’s advocate Gladys Radek wasn’t surprised when the Prime Minister didn’t answer the door of his Parliament Hill office on Valentine’s Day when missing women’s family members called hoping for a meeting. It was in the wake of a blistering Human Rights Watch report, which alleged police were themselves among the perpetrators of violence against women.

But as Women’s Memorial Marches were held across the country to honour an estimated more than 600 missing and murdered women, the organizer with Families of Sisters in Spirit held a faint hope that Harper might at least acknowledge the growing crisis.
“Every day we hear a new story, a new injustice,” said Radek, who co-founded Walk4Justice following her niece Tamara Chipman’s 2005 disappeared along B.C.’s Highway of Tears. “Violence against Aboriginal women does not take a day off; it hasn’t for 520 years [of] colonization, assimilation and the outright desire for the land, water and air.

“The white people are right now almost succeeding in a silent genocide that’s taking our women, in any way shape or form. Nothing has changed in 520 years, the raping, pillaging, enslaving, buying and selling, and all-out killing our women under the watchful eye of this government.”

In Vancouver, nearly 2,000 people attended the oldest of the country’s memorial marches, started 22 years ago after the murder of a Native woman in the Downtown Eastside. Baskets of vibrant roses–red for the murdered, yellow for the missing–travelled through the neighbourhood, leading the loudly drumming and singing crowd in remembering the departed.
For former B.C. Lieutenant Governor Stephen Point, his first Women’s Memorial March was marked by a mix of sadness and inspiration. In December, the Stó:lo leader was named the province’s “champion” of the missing women’s inquiry recommendations. He emerged, sombre, from a families-only memorial service in Vancouver’s Carnegie Centre just before the march began.

He told Windspeaker he has spent the last months reviewing the Missing Women Commission of Inquiry report, as well as beginning to reach out to advocacy organizations and missing women’s families, hoping to build a representative committee for the next year. And though he acknowledged  lingering bitterness over B.C.’s refusal to fund organizations to participate in the inquiry, he said that he has so far heard only “yes” in response to his invitation.

“This is where it’s really happening,” Point told Windspeaker in the midst of the swelling Downtown Eastside crowd. Behind him, strings of embroidered squares stretched across the street, carried in honour of dozens of Aboriginal women who disappeared. “These are the very people impacted by the murders and the missing women–their families.

“It’s empowering to be here with them, to hear their stories, and to participate with them. It’s a tremendous day for me.”
When asked what he hoped to achieve in the coming year as missing women’s champion, Point didn’t hesitate: “Awareness among everyone that these things are going on, and that we need the courage to bring about major changes in our justice system to make it safe for Aboriginal people to report crime, and for Aboriginal women to be safe in our communities.”

The founder of police watchdog group Vancouver Downtown Eastside Copwatch–herself a former sex worker in the neighbourhood, who has known missing women–told Windspeaker the annual marches are crucial to advocating for increases in Aboriginal women’s support services.

“This march is very important to me, to bring awareness to our missing and murdered women in Vancouver–and across Canada–and to hold the proper authorities accountable for how they allowed the women to go missing in the first place,” said Jennifer Allan.

“On a personal level, it’s very important to me to stand up and let authorities know we’re no longer going to tolerate them turning a blind eye while our women go missing and get murdered.

“We’re going to do something about it, whether it’s marching in the streets, bringing civil suits, and more. For First Nations women, it’s just a continuation of colonization and genocide... We have to change the laws, we have to get more social services put in place, and get society to care about these women. That, no matter their social status or the colour of their skin, they’re all human beings and we won’t tolerate human beings going missing or murdered in our country.”

For Radek it is the continuing struggle of other families and loved ones of the disappeared who inspire her to continue fighting for justice. Many groups–including FSIS, Walk4Justice and the Assembly of First Nations–are now rallying around calls for a national public inquiry into murdered and missing Aboriginal women.

“Our demands have been very clear: for justice, closure and equality,” she said. “The first thing we need is accountability.
“I’m going to be as loud and proud as I can for the families. They’re the ones that keep me inspired and give me strength to do what I’m doing.”