Yellow Horn is seeing the world, getting paid 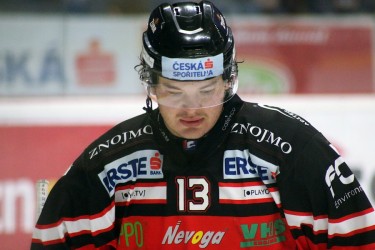 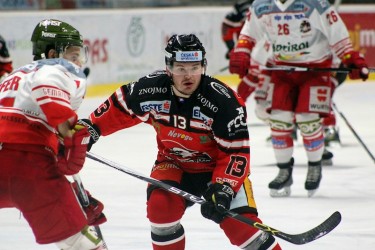 Following a stellar hockey season in Austria, Colton Yellow Horn has signed on to compete in an even higher calibre overseas circuit next year.

For his regular season and post-season performances, the 28-year-old forward was chosen as the most valuable player in the Austrian circuit dubbed the Erste Bank Eishockey Liga (EBEL), which translates to First Bank Hockey League.

But Yellow Horn was not entirely happy with the way his season ended up. That’s because his squad was defeated 4-2 in its best-of-seven championship final series by a team called Red Bull Salzburg.

“It was exciting but at the same time it was heartbreaking to lose, especially losing Game 6 at home,” Yellow Horn said.
The eventual league champs eked out a 4-3 victory in the series finale, held on April 12.

Yellow Horn earned a pair of assists in Game 6 to earn sole possession of the league record for most playoff points in one year. He broke the previous record of 27 points, which had stood since 2004.

After his season with the Znojmo Orli squad was complete, it was announced that Yellow Horn would be taking his talents to the Czech Republic for the 2016-17 campaign. He has inked a deal with a team in Plzen.

“It’s a step up,” he said. “I would sayoverall the Czech league is a little bit better of a league. It’s an opportunity for me to keep moving up. And it’s a step in the right direction.”

Though he was never drafted by a National Hockey League team, Yellow Horn has managed to have himself a decent pro career. He is gearing up for his ninth season in the pro ranks.

While he never played a game in the NHL, Yellow Horn did suit up for clubs in three different North American minor pro leagues.

Yellow Horn played for the Elmira Jackets, Stockton Thunder and Ontario Reign in the East Coast Hockey League. He also toiled for the Allen Americans, when they participated in the Central Hockey League.
And during the 2012-13 season he appeared in 28 games with the New Hampshire-based Manchester Monarchs in the American Hockey League, which is just one step below the NHL.

Yellow Horn has also toiled for four different franchises abroad, three in Austria and one in Japan.

And he doesn’t foresee himself playing in North America again at any point.

“I think those days are done for me,” he said. “I’m an older player now. And the AHL and the NHL is becoming a younger league.”
Plus, he really enjoys his time overseas now.

Besides making more money in Europe than he would make with a North American minor pro franchise, Yellow Horn also likes the fact teams abroad do not play nearly as many regular season contests as clubs on this continent.

And it’s rare for teams to play three games in three nights, which happens at times for North American pro clubs.

Plus, being in Europe, when his schedule permits, Yellow Horn can quickly travel to various other countries. For example, this past season he ventured off to see hockey-playing friends in Slovakia and Hungary.

Yellow Horn’s Austrian experience this season was much more memorable than his first stint in the European country. He started off his pro career with a team in Salzburg but was forced to return home after playing just 11 games due to an illness, which was never properly diagnosed.

“I got really sick in October that year,” he said. “I couldn’t walk and I couldn’t do anything. I lost 25 pounds in three weeks. And it took me five months to recover from that.”

Though he didn’t make it to the NHL, Yellow Horn said he is content with how his pro career has played out. Plus he believes he proved himself by collecting 18 points in the 28 AHL contests he appeared in.
“I’m happy with the way things have worked out for me,” he said. “I have no regrets about going overseas. I’ve been able to keep playing hockey and see the world.”

His future goals now include possibly playing in Switzerland, which is an even more lucrative league, or Russia’s Kontinental Hockey League, the world’s best paying league other than the NHL.