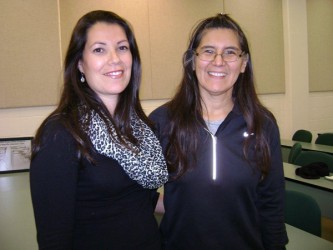 Gifts From the Elders, a 60-minute film, documents a project that focused on the transfer of traditional knowledge from Elders to youth.

Five young people between the ages of 20 and 30 spent their summer vacation in 2011 interviewing Elders in their home communities, Batchewana First Nation of Ojibways near Sault Ste. Marie, Ont., and Ojibways of Pic River First Nation in the Thunder Bay District.

Chantelle A. M. Richmond, a member of Pic River, developed the project and is the producer of the film. Richmond is a Professor of Geography with a cross-appointment in First Nations Studies at Western University in London, Ont. One of her role models when she was growing up, she said, was her uncle Roy Michano, chief of Pic River for more than 30 years. He fought long and hard and passionately for land rights and environmental issues, she recalled. His passion and community involvement shaped her thinking and approach to her work.

In developing the research project, Richmond set out to do it in a way that both respected and benefited the communities involved.
“Typically, a lot of the research that’s been happening in First Nations communities does not benefit communities… it’s not translating into improved health for Aboriginal communities,” she said.

Richmond also wanted to repair the breach that has occurred between youth and Elders as a result of colonization.

Traditionally, Elders were responsible for the transference of traditional knowledge to the young people, taking them on the land and teaching them skills and cultural values about the importance of harmony with the natural world to ensure continuing survival.

The lands that once acted as the classrooms have been taken from First Nations and devastated by development. Traditional hunting, trapping and medicine harvesting grounds have been clear-cut and mined, and toxins have been poured into lakes and rivers that once provided food in abundance for families.

As one Elder in the film says, you can’t eat too much of the fish now anyway because of the poisons.

Adding further damage were the government policies and programs that scooped children and deposited them into residential schools and later, child welfare agencies, separating them from Elders, extended family and communities.

For the research project, five youth were selected to interview Elders in their communities. They were trained in community-based research techniques at Western University. In keeping with the participatory research approach, the communities were involved throughout the process from looking at the community’s vision and identifying community desires to approving the film before it was finalized.

“The film really centres around the journeys of these kids,” said Richmond. At first, she said, “they were really intimidated, but also really excited about the opportunity to spend all that time just sitting with the Elders.”

On the other side, Richmond said, “the Elders were really willing and excited and happy for them to come and to share their information with them.”

Richmond brings the past forward into the present as the film shows the young people growing under the careful and gentle tutelage of the Elders. They gain an awareness that they have to become the new keepers of the knowledge that will ensure the continuance of not only Indigenous but non-Indigenous communities.

They are determined to do something about the health status of people in their communities, health issues such as addictions, nutrition, obesity and lack of spiritual involvement.  For the Elders, their pride and dignity is restored because of the affirmation that they have something valuable to share.

The final edit on the film was completed after sharing circles where the rough cut of the film was shown at Elders conferences in both participating communities. The feedback from those gatherings was incorporated during the final edit and then community events were held for the screenings in Thunder Bay, Marathon, Sault Ste. Marie and London.

“That’s the way we’re giving back,” said Richmond who said, “my heart has always been in the community and making sure that the work I do is really promoting community wants and desires...and to ask the sorts of questions that they’re interested in.”

Richmond is hopeful that the film will inspire other communities to create opportunities for Elders and youth to sit together.

“I think that both youth and Elders are open to that,” she said, “but there hasn’t been enough. The structural mechanism hasn’t been put in place to allow for that to happen. I think that was one of the biggest messages coming out of the film. Make more space for the interaction between Elders and youth before that knowledge is gone.”

Each community was given 500 copies of the film to distribute to their members and to share as they wish. Gifts From the Elders was chosen for two film festivals – the American Indian Film Festival and the LA Skins Festival. The film screened at the University of Toronto on Nov. 1.

Starting in January 2014, the film will be available for online viewing at www.giftsfromtheelders.ca. In the meantime, Richmond may be contacted directly for a copy of the film. Richmond is the producer/writer and James Fortier, also a member of Pic River is the director.